You are here: Home / Uncategorized / Decoration of T shirt

One of the earliest examples of T-shirts with a logo or decoration can be found in the 1939 film The Wizard of Oz. Three men attending to the Scarecrow at the Wash & Brushup Company in Emerald City are seen wearing green T-shirts with the word “Oz” printed on the fronts.

In the early 1950s, several companies based in Miami, Florida, started to decorate T-shirts with different resort names and various characters. The first company was Tropix Togs, under founder Sam Kantor, in Miami. They were the original licensee for Walt Disney characters in 1976 including Mickey Mouse and Davy Crockett. Later, other companies expanded into the T-shirt printing business, including Sherry Manufacturing Company, also based in Miami. Sherry, started in 1948 by its owner and founder Quinton Sandler as a screen print scarf business, evolved into one of the largest screen printed resort and licensed apparel companies in the United States.

In the 1960s, the ringer T-shirt appeared and became a staple fashion for youth and rock-n-rollers. The decade also saw the emergence of tie-dyeing and screen-printing on the basic T-shirt and the T-shirt became a medium for wearable art, commercial advertising, souvenir messages, and protest art messages. Psychedelic art poster designer Warren Dayton pioneered several political, protest, and pop-culture art printed large and in color on T-shirts featuring images of Cesar Chavez, political cartoons, and other cultural icons in an article in the Los Angeles Times magazine in late 1969 (ironically, the clothing company quickly cancelled the experimental line, fearing there would not be a market). In the late 1960s, Richard Ellman, Robert Tree, Bill Kelly, and Stanley Mouse set up the Monster Company in Mill Valley, California, to produce fine art designs expressly for T-shirts. Monster T-shirts often feature emblems and motifs associated with the Grateful Dead andmarijuana culture.Additionally, one of the most popular symbols to emerge from the political turmoil of the 1960s were T-shirts bearing the face of Marxist revolutionary Che Guevara.

Today, many notable and memorable T-shirts produced in the 1970s have become ensconced in pop culture. Examples include the bright yellow happy face T-shirts, The Rolling Stones tops with their “tongue and lips”[8] logo, and Milton Glaser’s iconic “I ♥ N Y” design. In the mid-1980s, the white T-shirt became fashionable after the actor Don Johnson wore it with an Armani suit in Miami Vice.

The most common form of commercial T-shirt decoration is screen-printing. In screen-printing, a design is separated into individual colors. Plastisol or water based inks are applied to the shirt through mesh screens which limits the areas where ink is deposited. In most commercial T-shirt printing, the specific colors in the design are used. To achieve a wider color spectrum with a limited number of colors, process printing (using only cyan, magenta, yellow and black ink) or simulated process (using only white, black, red, green, blue, and gold ink) is effective. Process printing is best suited for light colored shirts.Simulated process is best suited for dark colored shirts.

In 1959, the invention of plastisol provided an ink more durable and stretchable than water-based ink, allowing much more variety in T-shirt designs. Very few companies continue to use water-based inks on their shirts. The majority of companies that create shirts prefer plastisol due to the ability to print on varying colors without the need for color adjustment at the art level.

Specialty inks trend in and out of fashion and include shimmer, puff, discharge, and chino based[10] inks. A metallic foil can be heat pressed and stamped onto any plastisol ink. When combined with shimmer ink, metallics give a mirror like effect wherever the previously screened plastisol ink was applied. Specialty inks are more expensive to purchase as well as screen and tend to appear on garments in boutiques.

Other methods of decoration used on T-shirts include airbrush, applique, embroidery, impressing or embossing, and the ironing on of either flock lettering, heat transfers, or dye-sublimation transfers. Laser printers are capable of printing on plain paper using a special toner containing sublimation dyes which can then be permanently heat-transferred to T-shirts.

In the 1980s, thermochromatic dyes were used to produce T-shirts that changed color when subjected to heat. The Global Hypercolour brand of these was a common sight on the streets of the UK for a few years, but has since mostly disappeared. These were also very popular in the United States among teenagers in the late 1980s. A downside of color-change garments is that the dyes can easily be damaged, especially by washing in warm water, or dye other clothes during washing. 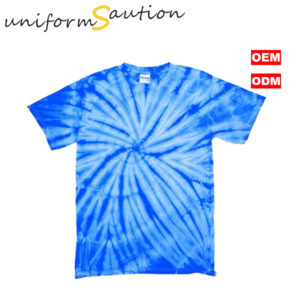 An example of a tie-dyed T-shirt

Tie dye originated in India, Japan, Jamaica, and Africa as early as the sixth century.Some forms of tie dye are Bandhani (the oldest known technique) used in Indian cultures, and Shibori primarily used in Japanese cultures. It was not until the 1960s that tie dye was introduced to America during the hippie movement, a time when the Vietnam War was being heavily protested. 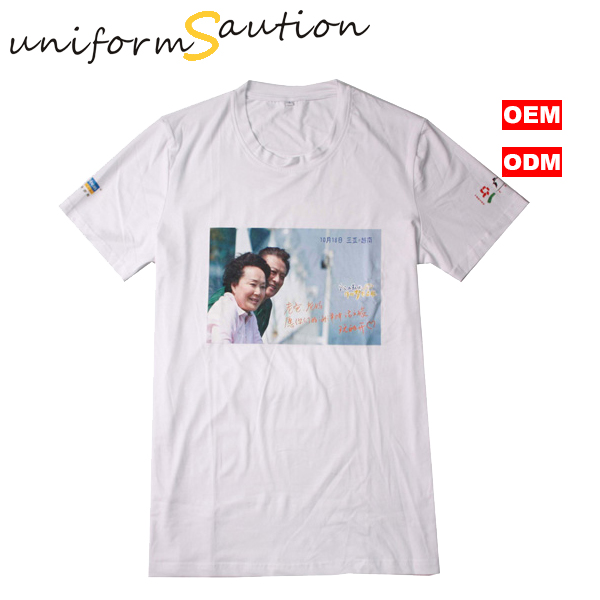 Another form of T-shirt decoration is heat transfer vinyls. These allow people to make short runs of printed shirts using plotter cut vinyl that they can then heat press onto the garment. They are made in a multitude of colors, patterns, and styles.

Before the hippie movement Rit Dye was known as a hobby for older women. Other methods of decorating shirts include using paints, markers, fabric transfer crayons, dyes, spray paint, and many more. Some techniques that can be used include sponging, stenciling, daubing, stamping, screen printing, bleaching, and many more. 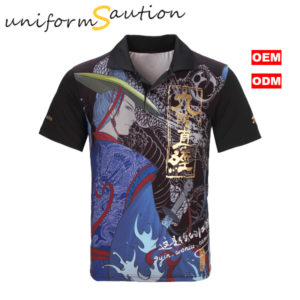 Dye-sublimation printing is a direct-to-garment digital printing technology using full color artwork to transfer images to polyester and polymer-coated substrate based T-shirts. Dye-sublimation (also commonly referred to as all-over printing) came into widespread use in the 21st century, enabling some designs previously impossible. Printing with unlimited colors using large CMYK printers with special paper and ink is possible, unlike screen printing which requires screens for each color of the design. All-over print T-shirts have solved the problem with color fading and the vibrancy is higher than most standard printing methods, but requires synthetic fabrics for the ink to take hold. The key feature of dye-sublimated clothing is that the design is not printed on top of the garment, but permanently dyed into the threads of the shirt, ensuring that it will never fade.[13]

Dye-sublimation is economically viable for small-quantity printing; the unit cost is similar for short or long production runs. Screen printing has higher setup costs, requiring large numbers to be produced to be cost-effective, and the unit cost is higher.[citation needed]

Solid ink is changed into a gas without passing through a liquid phase (sublimation), using heat and pressure. The design is first produced in a computer image file formatsuch as jpg, gif, png, or any other. It is printed on a purpose-made computer printer (as of 2016 most commonly Epson or Ricoh brands) using large heat presses to vaporize the ink directly into the fabric. By mid-2012 this method had become widely used for T-shirts. 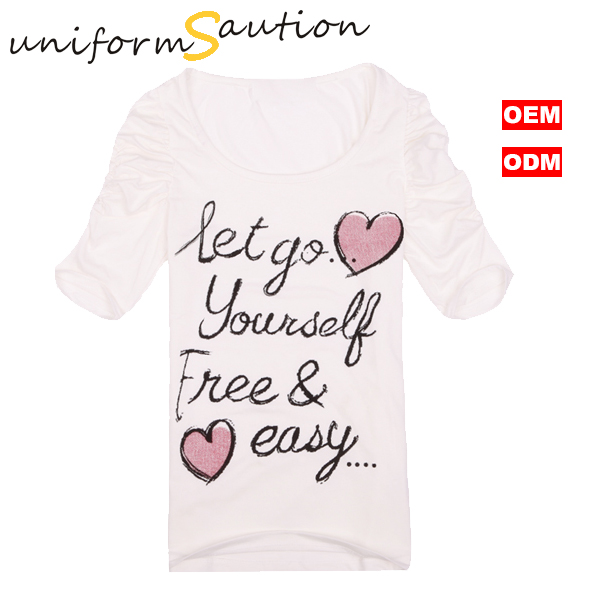 Since the 1980s, T-shirts have flourished as a form of personal expression.Screen printed T-shirts have been a standard form ofmarketing for major consumer products, such as Coca-Cola and Mickey Mouse, since the 1970s. However, since the 1990s, it has become common practice for companies of all sizes to produce T-shirts with their corporate logos or messages as part of their overall advertising campaigns. Since the late 1980s and especially the 1990s, T-shirts with prominent designer-name logos have become popular, especially with teenagers and young adults. These garments allow consumers to flaunt their taste for designer brands in an inexpensive way, in addition to being decorative. Examples of designer T-shirt branding include Calvin Klein, FUBU, Ralph Lauren, American Apparel, and The Gap. These examples also include representations of rock bands, among other obscure pop-culture references. Licensed T-shirts are also extremely popular. Movie and TV T-shirts can have images of the actors, logos, and funny quotations from the movie or TV show. Often, the most popular T-shirts are those that characters wore in the film itself (e.g., Bubba Gump from Forrest Gump and Vote For Pedro from Napoleon Dynamite). Designer Katharine Hamnett, in the early 1980s, pioneered outsize T-shirts with large-print slogans. The early first decade of the 21st century saw the renewed popularity of T-shirts with slogans and designs with a strong inclination to the humorous and/or ironic. The trend has only increased later in this decade, embraced by celebrities, such as Britney Spears and Paris Hilton, and reflected back on them, too (‘Team Aniston’). The political and social statements that T-shirts often display have become, since the first decade of the 21st century, one of the reasons that they have so deeply permeated different levels of culture and society. The statements also may be found to be offensive, shocking, or pornographic to some. Examples of T-Shirt stores and designers known for using offensive and shocking messages include T-Shirt Hell and Apollo Braun. Many different organizations have caught on to the statement-making trend, including chain and independent stores, websites, and schools. A popular phrase on the front of T-shirts demonstrating the popularity of T-shirts among tourists is the humorous phrase “I did _____ and all I got was this lousy T-shirt.” Examples include “My parents went to Las Vegas and all I got was this lousy T-shirt.” T-shirt exchange is an activity where people trade the T-shirts that they are wearing.

The current holder of the Guinness world record for “Most T-Shirts Worn at Once” with 257 T-shirts is Sanath Bandara. The record was set in Colombo, Sri Lanka, on December 22, 2011. The record was attempted on stage in front of a crowd of people in a public park in Colombo. Bandara surpassed previous record-holder Hwang Kwanghee from South Korea, who had held the record at 252 shirts.